While wider Internet commenting was filled with recriminations and conspiracy, E-Democracyâ€™s Neighbors Forums raised voices against violence by seeking solutions. 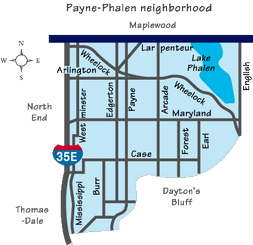 On August 4th, 2013, Ray Widstrand, 26, was brutally beaten by a group of young people who had gathered outside to watch a fight between two girls near midnight. Ray was walking through the group of approximately 50 young people when he was randomly attacked, almost beaten to death.

The 5-7 attackers were mostly juveniles and according to the police reports, were affiliated with primarily African-American street gangs. Ray is white. Others in the crowd attempted to mace the attackers and boldly stayed when police arrived to be witnesses to this senseless and extremely random violence. The incident has heightened fears among parents of young African-American males about how they are being viewed by the police and others in their daily lives and the randomness has people of all races in this multi-ethnic neighborhood on edge.

The Payne Phalen neighborhood of Saint Paul has seen its share of violence over the years. Just recently, Vincent Allison, a 17-year-old, was shot to death by another 17-year-old during a gang clash. Large groups of young people have been plaguing the streets of Payne Phalen, blocking traffic, harassing residents, and inciting fear among those who call Payne Phalen home. The police blame Twitter for frequent flash mobs late at night.

After the story on Ray Widstrand hit the press, the 800+ member E-Democracy Payne Phalen Neighbors Forum was buzzing about the assault. Neighbors used the forum as a way to discuss what had happened, to share concerns about the neighborhoodâ€™s ongoing safety, and to exchange ideas on how to stimulate change. This organic exchange was different than what was being presented elsewhere online. From vitriolic online news commenting on regional newspaper websites, to seeing the story used as a foil globally on racially charged websites, even local journalists took notice of the dramatic difference in what the most local people were doing online. There werenâ€™t over the top outcries of panic, blame, or hatred, nor using the story to further some political agenda, but collaborative dialogue among residents searching for answers from within.

Forums in the news – One, Two

Forum posts encouraged people to attend a community meeting held on Thursday, August 15th at Arlington Hills Lutheran Church and offered suggestions on how best to come prepared with questions for the panel. There was a lot of discussion around the lack of activities/opportunities available to neighborhood youth and how to keep these young people off the street. There were even posts from youth speaking out about their neighborhood and what they feel is needed to make change happen. There was also active discussion around increased police presence, continuity surrounding the enforcement of curfew and other applicable laws, and when to call the police when witnessing dangerous behavior.

The key element driving the organic exchange on the Payne Phalen Neighbors Forum was the online neighbor-connecting that had already taken place before the assault occurred. Because these neighbors already had a space built to stimulate dialogue and information sharing, the exchange happening on the forum was more constructive and focused than what was seen elsewhere. Online Neighbor Forums help highly local communities build resiliency – the ability to rebound or spring back from catastrophe. Families experience resiliency in times of crisis, and so do neighborhoods.

E-Democracyâ€™s BeNeighbors.org program connects neighbors online for community-focused interaction. With a focus on low-income, immigrant, and culturally diverse populations, E-Democracy is working to create inclusive online opportunities to spark dialogue, spread community information, and raise voices to take action. The project creatively promotes social belonging and a shared community experience that promotes local problem solving and collaboration of those with common interests – and in the process strengthens neighborhoods by growing their capacity to respond to challenges whether they be crises or opportunities.

The Payne Phalen Neighbors Forum is just one of many neighborhood-level spaces E-Democracy hosts, and we see this same type of exchange and dialogue happening all across the Twin Cities urban core. The Payne Phalen forum is a great example of how our Neighbors Forums and, in general, how providing inclusive online community engagement can have a positive impact on neighborhoods and citizens during times of crisis.

Quotes from the Forum

One thought on “Payne Phalen Responds to Violence: Neighbors seek solutions during a time of crisis via E-Democracy”