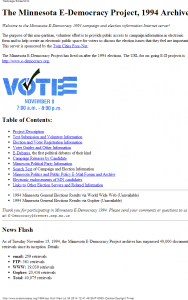 And so it was, two decades ago that a rag tag group of volunteers in Minnesota created:

We are gearing up for a year of celebration and reflective lesson sharing and some sort of official announcement.

For now, if you’d like to thank us for our work over the years, your donation could not be more timely and appreciated! Add a memo about the 20th anniversary.

Minnesota E-Democracy 1994 is a non-partisan effort to provide the
public with greater access to campaign and election information in
electronic form. Â This volunteer effort is working to help candidates
place their position papers and other information on the Internet.
Information, knowledge, and connectivity are key ingredients in our
democracy. Â This effort may demonstrate how electronic communication
can be a positive contribution as well as a challenge in our democracy.

Minnesota E-Democracy will focus on the Governor and U.S. Senate races.
However, it will also create an information infrastructure that will
allow campaigns and civic and political organizations at all levels to
distribute information electronically to a wide public audience. Â The
two primaryÂ access methods to the campaign information will be through a gopher/web
Internet server being established at the Twin Cities Free-net and a new
Minnesota Politics and Public Policy e-mail discussion listÂ (MN-Politics).

This will be an informal gathering that will give those interested inÂ this
effort a chance to meet and discuss ideas about the E-Democracy
project.

Around 8:00 p.m. we will go through a short agenda, including an
overviewÂ of the effort, working group organization, and a chance for
everyone to tell why they are interested in the project or what efforts
they plan toÂ focus on. Â If you cannot attend, please feel free to e-mail
me a short note

that I can read to those in attendance. ** Please let me know if you
planÂ to attend through e-mail or by telephone by Wednesday, August 3 at 5:00
p.m..

Thanks again for all your interest!
Steven Clift
clif…@gold.tc.umn.edu
612-824-XXXX

NOTE: Â As of 8/1/94 over 20 people have offered to volunteer with this
effort in some way or another. Â The break down of work groups is notÂ set
in stone. Â What tasks are we missing? Â What would you like to
contribute? Â What working group would you like to work with or create?

This is an action oriented effort and we are not attempting to build an
organization. Â Our timeline is very tight, so individual initiative and
action will be key to achieving success. Â Please send me a note
(clif…@gold.tc.umn.edu) saying which working group you would like to
help out with or which task you will do. Â Or Â describe your general
interests in this effort and I’ll attempt to suggest a task that would
aid the overall effort.

E-DEMOCRACY WORKING GROUPS (Non-Partisan/Non-Candidate Area)
You may be a volunteer with a specific campaign and be on a working
group.

Note: Where no campaign contact or EMV information appears,I have not
been in contact with that campaign as of 8/1/94. Â Efforts will be made
to acquire the position papers of all candidates, however during the
demonstration phase (primary) it is possible that not all candidate
information will become available in a timely manner. Â Independant and
minor party candidates are also being contacted, but do not face a
primary. Â Materials collected from non-primary candidates may be placed
on the E-Democracy Server before the primary, but the timeline to
obtain those postings will be focused on the general election phase.

Well, here we go! Â The Minnesota Town Hall 1996 is now open. Â Subscribers
to MN-DEMOCRACY are the our key path to reaching out to Minnesotans one
at a time. Â We will post the “Quick Byte” a second time. Please pass it on to
at least 5 people you think would be interested in this election’s online
events and information resources.

Thank you,
Minnesota E-Democracy Board

P.S. Instructions on how to subscribe/unsubscribe from MN-DEMOCRACY are
at the bottom of all posts to this list.
1. Â Minnesota Town Hall 1996 Annoucement:

Minnesota Town Hall is an online place for citizens to learn about and
discuss candidates and issues affecting this Â year’s Minnesota election.
Its premiere interactive opportunity comes Â October 22 – 29, when
candidates for U.S. Senate, including Senator Paul Â Wellstone and Rudy
Boschwitz, engage in an electronic debate (e-debate).

Minnesota Town Hall 1996 is built on the premise that civic institutions
must exist to provide citizens the liberty to express their views and
concerns in the political community to which they belong.

This fall’s marquee event will be the E-Debate between the candidates
running for the United States Senate. Â This will take place from October
22nd to October 29th and will be linked to a number of debates and events
produced by our collaborators and taking place in other mediums such as
radio and television.

This race may point toward the direction Congress will take in coming
years. Â That the Â Republican Senatorial Â Campaign Â Committee has targeted
the contest as a top priority indicates the significance of the race.
The e-debate is certain to be a political event that will elicit considerable
energy and substantive discourse.

You can participate by joining MN-POLITICS, an e-mail public discussion
forum hosted by MN E-Democracy, or by joining one of several web based
conferences hosted by The Star Tribune Online, WCCO’s Channel 4000, and
Cafe Utne. Â More information is available on the web at
http://www.e-democracy.org.

We hope to use the global scope of the Internet to focus the
attention of not only the citizenry of Minnesota but also of interested
parties across the nation and world on this uniquely interesting and
significant race.

In this way we hope not only to highlight the political contest and
issues involved but also the power of the Internet as a tool to enhance
the Â democratic process locally and across the world by allowing more
people to participate.

We can be reached at:

Minnesota Town Hall 1996 has been produced by Minnesota Electronic
Democracy, a 501.c.3 with a mission to enhance the democratic process
through the use of computer networks. Â We have received generous financial
support from the Star Tribune/Cowles Media Foundation. Â We have also
enjoyed tremendous support from our collaborators in creating Minnesota
Town Hall 1996. Â These include Cafe Utne, Channel 4000 (WCCO Online), the
League of Women Voters of MN, Minnesota Public Radio, Minnesota Regional
Network, The Pioneer Planet, The River Project, The Star Tribune Online,
and the Twin Cities Freenet.

Members of the press and the general public are invited.

There will be a short presentation followed by a question period. After
the presentation, the fifteen computers in MTN’s Cyberspace will be
available until six o’clock PM for anyone interested in trying the Town
Hall or the campaign finance database.

DIRECTIONS TO THE MINNEAPOLIS TELECOMMUNICATIONS NETWORK

>From downtown Minneapolis:
Take the Third Avenue bridge across the Mississippi, turn right at Second
Street Southeast, and find a place to park. MTN is down the driveway at the
end of Second Avenue SE.

>From Saint Paul:
Exit I-94 at the Huron Avenue/University of Minnesota exit. Â Go west on 4th
Street SE to 2nd Avenue SE. Â Turn left on 2nd Street, cross University
Avenue and park. Â MTN is straight ahead, down the driveway across Second
Street SE.

Minnesota Town Hall 1996 on the World-Wide-Web:
———————————————–
The complete source for online Minnesota election information
including the U.S. Senate E-Debate and Campaign Finance Database