Tens of thousands were asked in a Census survey:

Do you use the Internet to access government services, forms, or information? (Including tax forms.) 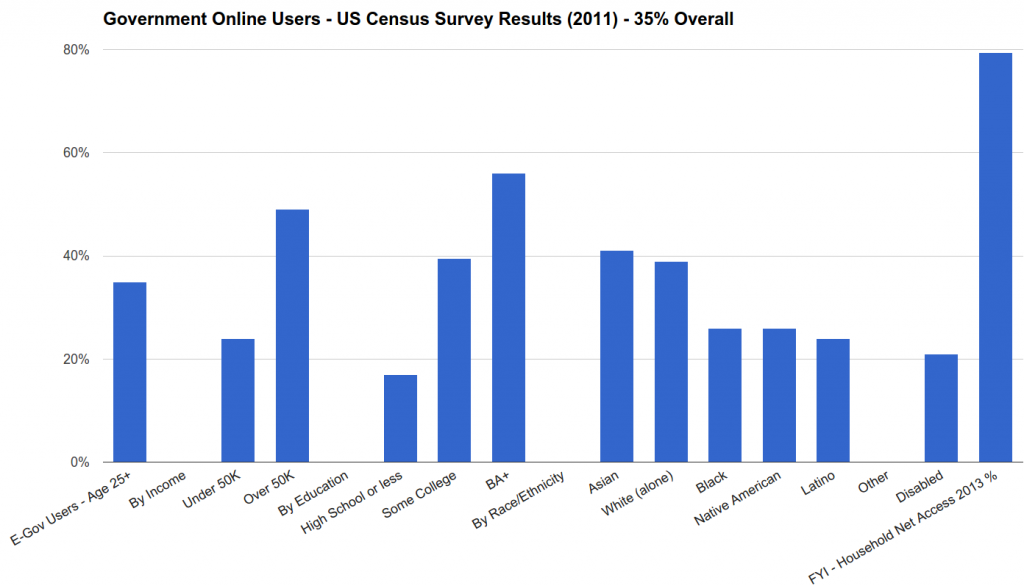 We’ve discovered aÂ little known Census survey question on e-government buriedÂ on page 161 of theÂ tables supporting theÂ NTIA’s 2013 DigitalÂ Nation report. Never before have so many people been surveyed on their use of digital government.

While the survey was asked in 2011, fresh numbers from 2013 are about to be released.Â Let’s not miss this opportunity for timely learning.

With over 53,000 households surveyed you can slice and dice this data by state, demographics, and more.Â Thanks to some help converting NTIA produced tables, I can now share some national demographic stats in easier to understand percentages.

Our inclusion analysis of the digital civic engagement report by PewÂ is one of our most popular blog posts in our 20 year history, so the demand for deeper analysis about potential growth audiences for civic/government digital engagement is there.

At the recent (and awesome) Code for AmericaÂ Summit,Â I was struck how the growing “inclusion” discussion was more about input into design or engagement in civic tech effortsÂ (important “Build with, not for” theme) but not so much about effective outreachÂ to broader, more representative use online.

Without a strong awareness of our baseline numbers about who is NOT yet being reached by open gov/civic tech/e-gov, how do we target our scarce resources to have the greatest impact? Put another way, if we only serve “those who already show up” with e-government, e-democracy, civic tech, etc., how is that making a dramatically positive digital difference in the world?

One thought on “Who uses e-government? Who doesn’t … yet??”