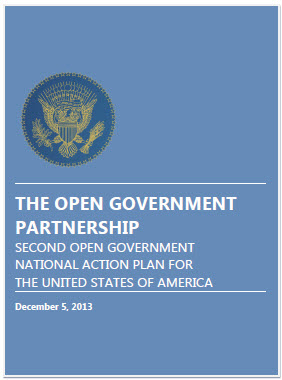 This plan is part of the U.S. involvement in the global OpenÂ Government Partnership. I recently had a chance to chat with folks Â involved with OGP-related efforts across Europe and this is a really
big deal that may not have crossed your radar.

Below is a full collection of links. Start here.

My big take away from the plan – participatory budgeting is one of theÂ only commitments that impacts the local level where most peopleÂ interact directly with “open government.” Let’s build on that. We need
state and local action plans too!

With my community engagement and former state e-gov lens on, I want toÂ see national commitments and “open government” strings attached toÂ Federal funding that for example get people the key government
information they really want – greater access to personalized localÂ crime information for example. (This comes up daily on ourÂ BeNeighbors.org networks.) If we want to demonstrate the value of open
government to the masses, find out what they want most and make it aÂ priority for release at every level of government.

On another point, the biggest problem with open government world-wideÂ is that there is almost no investment in increasing broad andÂ inclusive use beyond those who essentially already “show up.” If we
settle for a user base that is demographically highlyÂ unrepresentative, open government will be left to competitive partisanÂ politics and not be an engine for civic change. Some slides I put upÂ today illustrate the fact that so far the democratic participationÂ divide is wider online than off. Â Also note my proposed New Voices working group.

So,Â we need the U.S. Federal government to set solid goals for broaderÂ e-government use and they can start by digging into their own 2011Â CensusÂ (link to my query to researchers)Â and tracking uptake acrossÂ income, race, etc. on a yearly basis. Lessons from promotingÂ HealthCare.gov to many demographics likely to have been the leastÂ likely e-government users and sharing it more widely with the open
government/civic tech community would be a good step as well.

Among the highlights of the second National Action Plan:

â€œWe the Peopleâ€: The White House will introduce new improvements to
theWe the People online petitions platform aimed at making it easier
to collect and submit signatures and increase public participation in
using this platform. Improvements will enable the public to perform
data analysis on the signatures and petitions submitted to We the
People, as well as include a more streamlined process for signing
petitions and a new Application Programming Interface (API) that will
allow third-parties to collect and submit signatures from their own
websites.

Freedom of Information Act (FOIA) Modernization: The FOIA encourages
accountability through transparency and represents an unwavering
national commitment to open government principles. Improving FOIA
administration is one of the most effective ways to make the U.S.
Government more open and accountable. Today, we announced five
commitments to further modernize FOIA processes, including launching a
consolidated online FOIA service to improve customersâ€™ experience,
creating and making training resources available to FOIA professionals
and other Federal employees, and developing common FOIA standards for
agencies across government.

The Global Initiative on Fiscal Transparency (GIFT): The United States
will join GIFT, an international network of governments and
non-government organizations aimed at enhancing financial
transparency, accountability, and stakeholder engagement. The U.S.
Government will actively participate in the GIFT Working Group and
seek opportunities to collaborate with stakeholders and champion
greater fiscal openness and transparency in domestic and global
spending.
Open Data to the Public: Over the past few years, government data has
been used by journalists to uncover variations in hospital billings,
by citizens to learn more about the social services provided by
charities in their communities, and by entrepreneurs building new
software tools to help farmers plan and manage their crops. Building
on the U.S. Governmentâ€™s ongoing open data efforts, new commitments
will make government data even more accessible and useful for the
public, including by reforming how Federal agencies manage government
data as a strategic asset, launching a new version of Data.gov to make
it even easier to discover, understand, and use open government data,
and expanding access to agriculture and nutrition data to help farmers
and communities.

Participatory Budgeting: The United States will promote community-led
participatory budgeting as a tool for enabling citizens to play a role
in identifying, discussing, and prioritizing certain local public
spending projects, and for giving citizens a voice in how taxpayer
dollars are spent in their communities. This commitment will include
steps by the U.S. Government to help raise awareness of the fact that
participatory budgeting may be used for certain eligible Federal
community development grant programs.