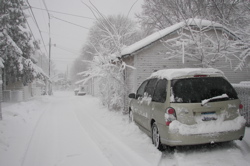 A recent discussion in the St. Paul Issues forum demonstrated the power of Issues Forums to:

A member of the forum posted his frustration at trying to collect money from his neighbors to cover the expense of plowing the alley.

I’m burning out (although I have to admit, my darling wife has been dealing with it the last two years). How do you attempt to extract money from the people who don’t feel the need to pay, and do you ever feel like egging their houses? I feel like “an enabler” sometimes – dealing with alley plowing, alley maintenance (ours is gravel), snow emergencies (sign), and recycling (sign) allows our neighbors to just evolve into inactive mush.

Over the next few days, over 27 different people offered advice, sympathy, or policy suggestions for dealing with this issue.

Sarah explained how it works on her block:

I pay $14 each winter for alley plowing. Everyone on our block ponies up except for one household that simply refuses, year after year. I don’t park in my garage off the alley but still — the garbage trucks need to get through, and $14 is practically nothing. One of my neighbors does the collecting each fall and we each make out a check directly to the plowing guy. While this system works on my block, I wonder how often it doesn’t work — it seems like a sensible service for the city to provide…..

Chuck explained how it doesn’t work on his block:

The person who last did it quit in frustration a couple of years ago. The apartment on the end of the block plows the first thirty feet of the alley to get to their driveway. So, we drive over the snow and there are two large ruts. When it gets bad in the spring everyone parks on the street.

Bill offered some practical advice on how to collect the money:

Just wondering: does your block have a block party each summer? or some way for neighbors to see each other, if only once a year? On our block we each pay $14; one good guy collects from all of us and negotiates with an alley plower.

John joined with others who thought that this was a service the city ought to provide:

I am a fan of the government doing as little as it needs to but garbage hauling and alley plowing are two things I don’t mind my city doing.

While, Mitch warned the city to keep away:

Our block has taken care of its own plowing for as long as I’ve lived there (13 years) and for probably a decade or two before that……… Neither I nor anyone I know on my block would trade the current system for anything. Keep your mitts off my alley, my garbage and my internet, City of Saint Paul.

And finally, long time member of the forum Erik pointed out:

I only say this because this is probably the most popular thing I’ve ever seen on here, and I’ve been here from the beginning. Really, you should organize. As someone with nada for a stake in it, I’m happy to help moderate if you’d like.

So the seeds for community action were planted, even if nothing has yet to sprout. While no city officials directly contributed to this discussion, many were certain to have read it. In fact, we’re planning to forward an edited summary of the discussion to all seven city councilors for their attention. There was no consensus in the forum on how best to deal with Alley Plowing, but good ideas did emerge and participants were better able to place their own experiences into a broader city wide context.