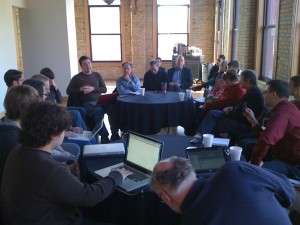 Programmers get â€˜Neighborlyâ€™ at Hackathon

If youâ€™ve ever wondered what a Hackathon is, put aside all your pre-conceived notions of nefarious programmers staying up all night to crack some highly secured code â€“ these events are very constructive efforts. Hackathonâ€™s generally refer to events where programmers meet to do collaborative computer programming, and in this case, civically minded programmers were invited to begin a longer-term effort to provide a tool for neighbors to better connect online.

After a general morning session on open government with 30 people, about 10 local programmers jump-started the â€œNeighborlyâ€ effort, which generally aims to help nearest neighbors connect online in a private setting to be “good neighbors” as well as to give “block captains” (often engaged by community policing efforts or neighborhood associations) tools to help them effectively communicate with interested neighbors.

The vision is for an individual to share information with neighbors and be able to dynamically exchange announcements and discussions among those within the selected â€œneighbors directory.â€

Other hackathon sessions to continue the Neighborly project followed the initial Dec. 12 event. In January, they met a second time and produced this important video.

The idea was also submitted into the Knight News Challenge and made it into the second round. The proposal we submitted is available.