The other month I prepared an hour and a half in-depth training on how to set up and run a local Issues Forum for a seminar in Estonia organized by the e-Governance Academy.

The new slides (6MB) are now up along with the full 90 minutes of audio (mostly in English).

I also managed to stop in Finland, Denmark, and the The Netherlands on the way home where I also presented on Issues Forums.

In Denmark, I appeared on national Danish radio’s Hard Disk program. My interview starts after an introduction in Danish.

In the Netherlands, I connected with e-democracy giants Tom Steinberg, with UK-based mySociety and Steven Lenos, with the Dutch Instituut voor Publiek en Politiek to advise the Dutch government on e-participation possibilities (there is a lot going on the Netherlands all ready.)

Here they are checking out the amazing city hall from a distance in The Hague. 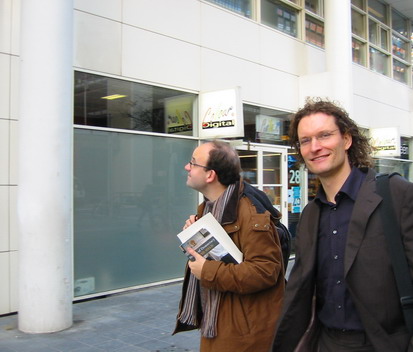 4 thoughts on “Issues Forums – Our Training in Estonia, Slides from Finland, Podcast from Denmark, and a Picture from the Netherlands”